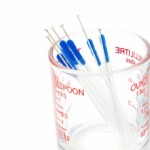 Myofascial pain syndrome is often seen in clinical practice as a cause for pain. It is characterized as a dull ache to a burning pain that can cause referral of pain to other areas of the body (Travell and Simons, 1999). One method used to treat this, is by dry-needling therapy (DNT). DNT has proved to be effective in treatment of myofascial pain, but it has shown to cause post needling soreness. This soreness discourages many patients from receiving further dry-needling or treatment (Kamanli et al. 2005).

Ways to help alleviate this post-soreness have been mentioned such as heat, stretching, ultrasound and application of pressure (Fleckenstein et al. 2010). All these modalities are done after the needle has been removed. This then adds an extra modality to the treatment as well as increased treatment time; therefore these modalities are often skipped by practitioners (Hong, 1994). Another factor to look at is that many of these modalities have not been researched objectively for effectiveness on relieving the post-needling soreness (Kamanli et al. 2005).

Using a moxi cigar, placed on top of the acupuncture needle whilst inserted into the active trigger point is a way in which heat as a modality to treat post-needling soreness can be combined into the needling time. Doing this study would also objectively research if there are benefits to this added modality and its effectiveness on alleviating post-needling soreness.

The aim of the study is to investigate if heat conduction using a moxi cigar is an effective modality in alleviating post-needling soreness when treating myofascial pain syndrome with DNT.

Each participant will be treated once with readings being recorded before treatment as well as immediately after, then again after a seven minute break. They will be asked to come in 24 hours post treatment to obtain the last readings as well as to complete a pain diary prior to the last 24 hour measurement.

The full research article can be downloaded from this link.

Poppin shìt you would think I went to school for chiropractor